The other day I had a serious Golden Girls moment. Not a moment where I remember a funny, yet cliche punchline of Sophia's or where I see a scantily clad, sassy, older woman who reminds me of Blanche. It's a moment where I realize I am getting exponentially closer to becoming a Golden Girl myself!

It was while I was driving home the other day. I passed by a boy driving a Jeep with the top down. And I do mean BOY. I thought, "I can't believe this kid is out joy riding in his parents car. Maybe they don't know. Maybe I should call the police. Someone could get hurt!" And then after I resisted the 911 call I started to think. "Maybe he is old enough to be driving. Is that possible? I've probably been driving since before he was born!" And then I started to do some math and my mouth actually fell open and I said out loud, "No way!" I've been driving for 17 years and seeing as how they really do give licenses to children in this state, it is totally possible and probable that I have been driving since before he was even conceived. Golden Girl, go get your glasses chain and old lady purse and start looking at real estate in South Florida! When did time hit warp speed? It seems like just yesterday that I was riding around in my own Jeep with the top down.
Now don't get me wrong, I am totally fine with getting older, but I can do without all the constant reminders. All those young people flaunting it in my face. My joints not working properly. My hairs rapidly turning gray. So after much debate I finally decided to take away some of those reminders. There will always be younger, more energetic people who have cat-like reflexes and nimble joints. But as for the gray hairs... I bid you farewell, good sirs. 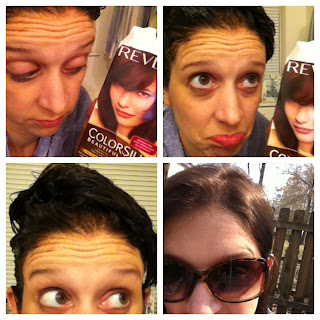 A few weeks ago at a get together I casually mentioned to some girlfriends that I was thinking about just letting my hair go gray naturally. You could almost hear the sound effect of a record scratching. "Say what, Stacie? We think not." I even had a few offer to come to house and hold me down and douse me with dye. So I started to give it some serious thought and I came to this conclusion: I am getting older, but I have enough reminders of that fact, so why do I have to be reminded further every time I look in the mirror.

My major resistance has been that I haven't dyed or highlighted my hair in years. It's been 100% my own color. Not Revlon's, not Clairol's, not Loreal's, not Garnier's, not a super overpriced salon's. I know you're all shaking your heads and can't believe I'm outing myself on my blog, but guess what? I'm not trying to fool any of you. I am 33, going on 40, then 50, then 60, and by God's grace a few years more. No, I'm not trying to fool anyone, but maybe myself. If I have to hobble out of bed in the morning I should at least look my best doing it! That's what Blanche would say.

And so it begins! Hello Dark Mahogany Brown!
Posted by Unknown at 5:26 PM