Ahhhh, spring!! It abounds with newness! Birds sitting on egg-filled nests, flower buds swollen with the promise of vibrant blooms, even the insects seem to to have descended upon us with a smile on their multi-eyed faces. And the eight-or-more-legged crowd seems to be fruitful and multiplying as well. 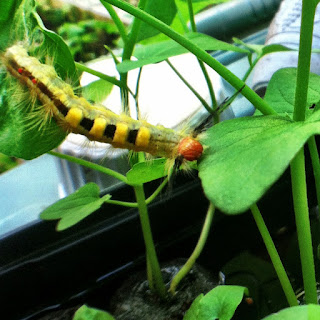 This past weekend we attended a birthday party at a county park. The kids had a great time and were playing well with all their friends. But at one point my daughter alerted me to the fact that there was a spider under the see-saw, teeter-totter, whatever it's call.
My natural inclination is to tell her to leave it alone. Spiders are our friends. They eat mosquitoes and annoying bugs. I am actually unlike most 'girls' in the fact that I like spiders. Yes, that's right. I like spiders. For the reasons that I mentioned, but also because I find them fascinating. We have a backyard with lots of trees and every spring we see an abundance of golden silk spiders (or banana spiders as some may call them.) Before I had children I would work outside in the yard and watch these spiders throughout the season. The large female spiders reach 3-4 inches in diameter and are beautiful. One year I watched one through it's whole life cycle. She would spin her large web daily and then sit on her perch in the middle waiting for any food to find it's way into her web and then she would attack it. She would leap down and stun the critter and quickly begin wrapping her golden silky web around it until it was immobile. She would then leave it hanging there until she was hungry so as to not ruin her petite orb-ish figure. I actually was so concerned she didn't have enough to eat that I went and bought crickets at Petsmart and threw them into her web. No kidding. She was kind of our little pet that summer. And when she wove a little egg sac to our siding I couldn't wait to see little baby spiders. And I did get to see them! They jumped right out of that egg sac and flung themselves all over the backyard riding on their tiny yellow silky strands. A few hung out in the web for a few days.
After she birthed her babies Charlotte climbed back into the trees where she was born to live out the remainder of her days. She was a beautiful creation of God's and it was a privilege to watch her.

So fast forward a few years to that moment this weekend on the playground. I looked under the see saw where my children had been playing and saw this:
Sorry for the fuzzy picture, but I was kind of freaking out a bit. It was a brown widow spider momma hiding behind 3 spiky egg sacs in her web. I knew she was a brown widow, because that same summer I loved watched Charlotte I also eradicated many other poisonous spiders after I googled them to find out what they were, kind of a spider genocide, but poisonous venom is a deal breaker for me. Also, I knew she was protecting her little babies so she would be defensive. But guess what? I was protecting my little babies, too. So I cleared the kids out of the area and got a stick for my weapon of choice. I scraped her off and she was fast and furious running around on the stick so I threw the stick into the woods. (Or so I thought) I got the egg sacs and stepped on them. I was kind of proud of myself, Supermom, for saving the day. Go ahead kids. Play on. Supermom saved the day.

So... after I got home that afternoon I noticed a strange bug bite on my shoulder. Kind of like a mosquito bite, but with 2 bumps in the middle instead of one. Great, I knew what that meant. Spider bite. I guess she had the last laugh after all. The next several days my muscles had a inflammatory response to the bite. First my shoulder, then my elbow, then my neck. It's really a bummer that my body always fights back with inflammation instead of super powers. I guess when Peter Parker talked about his spider sense tingling he probably wasn't talking about a burning, radiating pain down his arm. Finally I went to the doctor and started some antibiotics and the bite is just about healed. But I am sharing this with you so that you know to be careful and look under playground equipment to see what lurks out there! And most importantly- get one of the big, strong dads at the birthday party to go spider wrangling!

My days of being fascinated by spiders have come to an abrupt halt (I hear my mom cheering!) Charlotte and I will always have the summer of '05, but now I am the protective, defensive momma and spiders better watch out! Instead of eating bon bons and watching soap operas in their web all day, they should keep just one of their many eyes looking out for me! Because I do walk softly and carry a big stick... covered in Raid.